Captain Des holds a 100 ton Near Coastal Captains License, and is a native of Port Jefferson who has been fishing the local North Shore waters his entire life. He has been featured in the Fisherman magazine, Newsday and as a guest on both the Fishing Line and the Noreast Radio shows. Desmond has also appeared as a speaker at several local fishing seminars including George Poveromo’s Saltwater Sportsman’s Seminar andannually at Jerry McGrath’s well known Sport fishing on Long Island seminars.
Desmond worked for 11 years as a mate and a Captain for the local party boats. After graduating Fordham University with a degree in Liberal Arts and Music he decided that he wanted to continue being a fisherman and moved to Montauk where he worked as a Captain for the Viking Fleet. For over three years, Capt Desmond ran trips which included 2 and 3 day cod fishing trips to Georges Banks as well as local trips for Striped Bass, Fluke, and Block Island trips for sea bass and porgies.
In 2002, Desmond returned to his home in Port Jefferson and began his own business, Celtic Quest Inc. which he owns and operates today.Our humble beginnings began in Mt Sinai Harbor, where we kept our first boat on a mooring and picked everyone up at the boat ramp. The Celtic Quest was a 1959, 45 foot, 30 passenger boat which was no frills to say the least. It was a boat though that has seen some epic fishing trips for sure! Luckily with the tremendous fishing in our area and the great fortune of receiving a berth in Port Jefferson Harbor, business grew and we were able to purchase our current boat, the Celtic Quest II in the fall of 2005.
In 2007 we have added the Celtic Quest III, a 25 foot Mako center console, 40 knot charter boat which will carry up to 4 passengers for custom fishing charters. But in the fall of 2009 we decided to sell the cqIII and purchased our new boat…a beautiful 75 foot fiberglass party boat!!! She is an extremely sea worthy and has sailed for many years out of captree before coming to Port Jefferson. We spent several months refurbishing this vessel and no dollar was spared in upgrading the machinery and electronics. She is a great boat and very comfortable to fish off of. We hope you like it!
Desmond is passionate about sharing all that our waters have to offer families and especially children.   Along with his crew devote much of their time to furthering that cause and  It is this their hope that no matter what age or expierience level, those that fish with us will be able to experience the same joy and appreciation that we feel as in our lives as fishermen. 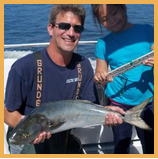 Capt mark has been working with us for several years now and we are incredibly fortunate to have his help!! Mark has worked on the water for over 20 years and has run some of the top party boats on the north shore. He is always a crowd favorite and his upbeat, friendly personality along with his extensive knowledge of fishing make him a great assest to have onboard. 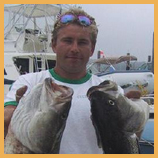 Captain Jon holds a 100 ton near coastal capt license and has been working for over a decade now as a local fisherman. His knowledge of Long Island sound is second to none. Jon has been with us for 7 years now and expertise and experience is a great asset to our business. He is always a crowd favorite and is great with the kids.
Jon currently is a full time high school English teacher. He promises though to continue to help us on the weekends and during the summer months!! 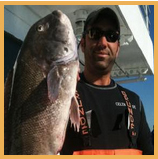 Capt Chris has been working with us for 8 years now and has been an integral part of the business since the beginning. Chris is a fantastic fisherman who knows the local waters as good as anyone. Chris and I worked together on the local party boats growing up and he is one of the top fishermen in our area by far. We are very fortunate to have Chris as part of our team, as his dedication to excellence and hard work on every trip he runs is always evident to our customers. 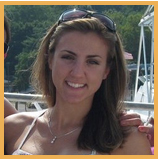 We are incredibly fortunate to have Bernadette running our office!!! She has been working with us since 2008 and as so many of our customers will attest she does an amazing job! Our regulars all love her and constantly tell us what a pleasure it is when they call the office.
Whether you are setting up a charter or just want to chat about the fishing, Bernadette does an exceptional job to help insure your trip is a success…
…not to mention she keeps the rest of the company in order!! ( Ask the crew…their pay checks are always on time!!